September 02, 2018
A few months after my Norway trip I was running a poetry workshop in the eastern suburbs of Melbourne. It was a grade 3 class in a rather multi-cultural school. I had this strange little conversation with one chatty boy:

"Where you from?" he asked.

Clarifying, I say, "I live up in The Dandenongs."

"No," he says "where you originally from?"

"Oh, well, originally from Tassie, but I lived in Sydney for a while."

"No." he says more insistently, "like, I'm from Egypt,"
and pointing to a friend, "he's from Ethiopia. Where you from?"

"What?" he says, and gives me a strange look.

"I suppose" I go on, "most of my ancestry goes back to England and places in Europe."

And it is weird.

And the conversation kept going:

Now the boy is really confused. And then he confuses me by proclaiming, "But you can't have a job if you're not married!"

"Do you get paid for this?"

And it is cool to be able make a living through words, which I sort-of manage to do; and to make my words feed into the lives others are living, which I think I sometimes manage.

And I do laugh about having had two wives, because it sounds so ridiculous to say. And it helps to laugh; to dampen, dilute, or maybe even disempower the grief. I am so used to the heavy-browed face of Truganini with her stern piercing look, I have to remind myself – she would've laughed too. Maybe a lot. Who knows! That photo was one fleeting moment in her long, full life.

And now, I keep imagining Truganini laughing – head back, mouth wide, a loud burst of sound filling the air. This scene flashes through my mind at the weirdest moments. Because, in reality, she was more than just an emblem and an icon, she was also just a person – trying to find her way in life: from grief to gladness; from childhood to adulthood; from Bruny Island to Flinders Island to Melbourne to Hobart; and eventually, although her body – finally and naturally – returned to the earth, her story carried on – across the earth – all the way to Norway and back again.

Truganini is more than just a symbol of lastness, lostness and death.

She is the face of the first people of Tasmania; the mirror that returned me to my history; and the story that gave some perspective to my grief.

For me, in this moment, she is a symbol of firstness, foundness and rebirth. 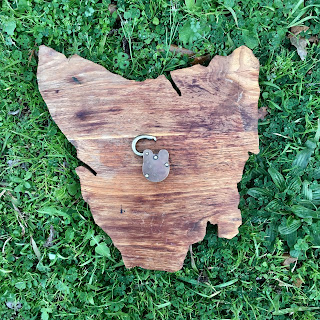 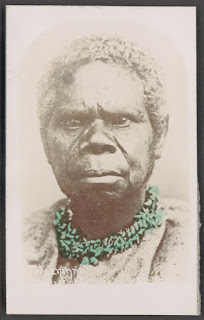 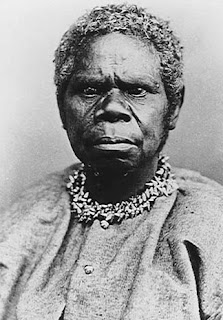 Silver albumen print, 1866 egg white paper salt silver sunlight all these whites combined in just the right balance, state and order brought forth the image of Truganini – a truly black and white affair – the photo had been taken her: seated, stern, staring her face Anglo-fied on a glass negative the iridescent glow of her shell necklace reduced to strings of black bullets all her subtle hues lost to the crudeness of her time in technology and sociology a chicken egg – cracked open albumen mixed with sodium chloride cotton paper coated left to dry then dipped in silver nitrate pressed against negative laid in the sun once her dark face emerged into white history a bath of sodium thiosulfate to fix the image but there's so much to fix and so much still yet to be broken
Read more